Home » Video Evidence: Will Gollini Ever Manage a Clean Sheet? 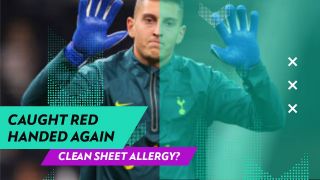 The third tier of European football and Spurs are unable to complete without the aiding and abetting of its biggest stars. The game itself made for dour viewing. Our opponents hailed from the PRVAliga which has ten teams in it. The most famous of which is probably Maribor.

The town is known as Murska Sobota with a population of 11,107. This is comparable to the town of Minehead in Somerset where the population is 11,700 and the local football club is Minehead AFC with a ground capacity of 1,500 with 300 seated. Their capacity might be smaller, but their history is much longer and quite impressive.

And Gollini was superglued to his line as the ball whistled past him.