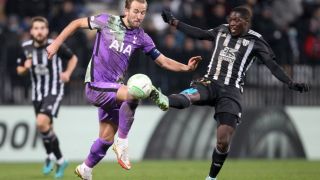 In what is easily Tottenham’s worst European night in recent memory, NS Mura has just beaten the Lilywhites 2-1 to leave their chances of progressing in the Europa Conference League hanging by a thread.

Spurs had secured a come from behind win against Leeds United last weekend and also went behind against the European minnows this evening.

Harry Kane struck back in the second half, and we kept pushing for the winner.

It never came the way of the ten-man Spurs. Mura then scored the winner with the last kick of the game, completely against the run of play.

This result is simply unacceptable, and fans didn’t hold back in their assessment of the performance.

Spurs made a Twitter post about the game after the final whistle and fans took to the comments to pour out their anger and frustration on yet another terrible night. Here are some of the best reactions:

When someone asks me who I support I say I don’t watch football. That’s how embarrassed I am of this club. We’ve just lost to the San Marino of European football

Today is possibly the worst performance of Tottenham Hotspur FC, in its entire history! We won’t make it to the January window quick enough…Sadly Conte has misjudged the standard at the club. It’s not of top ten, it’s is a club in relegation battles and doesn’t know it!

Worst performance I can remember for a while. We don’t even have 11 players worthy of the shirt at the moment. Conte is good but he’s not a miracle worker.