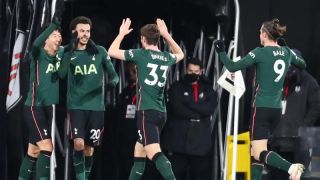 Tottenham Hotspur
“We literally had like 3 attacks and sat back the whole game” Mixed reactions from Spurs fans despite win
By Bruce Grove - 5 March 2021, 11:53

Tottenham fans have become very demanding after enjoying some good times under the management of Mauricio Pochettino.

The appointment of Jose Mourinho also raised their level of expectations considering that the Special One has won trophies at every club that he has managed.

His team has tried to manage the expectations, but sometimes they have struggled to meet them.

The Lilywhites are playing a result-based game at the moment and that has seen them sit back to absorb pressure from their opponents in most of their games.

Against Fulham yesterday, they allowed the Cottagers to have the best bits of play while they defended their early lead for the duration of the game.

Despite the win, some of the fans want Tottenham to do more than just win games.

The club posted the highlight of the match on their Twitter account and here are some reactions.

highlights? we literally had like 3 attacks and sat back the whole game

Fulham completely bossed the 2nd half. So depressing. We will achieve nothing this year.

Everyone has an off day. Believe me! Kane does not miss those headers. I think he was surprised no defender was near him! That could be it!