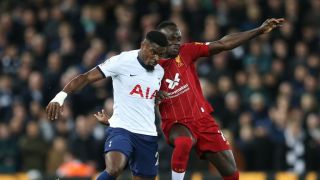 Tottenham Hotspur
“Was on Mane like a bee to honey” Aurier applauded for dominant display in unlucky loss
By Bruce Grove - 17 December 2020, 14:20

Serge Aurier is playing out of his skin at the moment and last night he showed how improved his game is in his battle with Liverpool’s best player Sadio Mane.

Aurier was nothing short of a clown last season, whereas Mane was one of the best players on the planet but you would never have known that after witnessing how the Ivorian bettered Liverpool’s star man.

It is obvious that Aurier has responded to the signing of Matt Doherty and we are now finally seeing the player that we had hoped to have seen since we signed him.

The defender can hold his head up high despite the unlucky loss and it is going to be a massive task for Doherty to displace the former PSG man.

Some Tottenham fans have taken to social media to express their delight at how the 27-year-old has grown this season and have acknowledged the performance he put in last night and let’s not beat about the bush, he beat Mane hands down and that is not something you can say too often.

He did so well today. Was on Mane like a bee to honey👏🏼

Best he’s ever played for us tonight

He's been so good