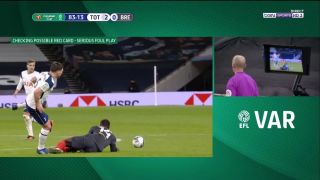 Tottenham Hotspur
Video – Mourinho has to hold back busted up Hojbjerg from returning to the game against Brentford
By Bruce Grove - 5 January 2021, 22:12

Jose Mourinho wanted hard men in his team and he certainly got one in Pierre-Emile Hojbjerg.

Mourinho may have used more colourful language when he demanded much more from the Spurs squad and in the Dane he has a man among men.

Hojbjerg was caught by Brentford’s Josh Da Silva and in all fairness, it was not deliberate but unfortunately for the Englishman, it was still a red card.

It left a nasty gash on Hojbjergs shin and it was obvious he had to come off but the 25-year-old still attempted to return to the field of play and it took the intervention of Mourinho to stop him in his tracks.