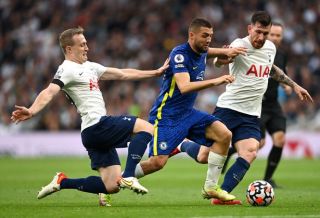 Noel Whelan has described the midfield partnership of Oliver Skipp and Pierre-Emile Hojbjerg as “formidable” as the pair emerges as the foundation of Tottenham’s attacking play.

They were in fine form on Sunday as Tottenham came from a goal down to beat Newcastle United.

Dele Alli is now out of favour with Tanguy Ndombele joining Skipp and Hojbjerg in a fine midfield three that supplies Harry Kane and Son Heung-min and Lucas Moura with balls to hurt opposing teams.

Nuno has been working to get the best players to make his preferred starting XI and former Leeds United man, Whelan believes his most reliable midfield pairing has sorted itself out already.

He praised Hojbjerg for his work ethic and Skipp for his calmness on the ball and says these attributes have made both players complement each other positively.

“They’re working well together. Controlling the game, speeding it up or slowing it down when they have to.

“That’s what it’s all about when you’ve got two in midfield.

“Ndombele is tracking back well, doing that dirty work as well as going forward.

“Hojbjerg works tirelessly, breaks up the play. Skipp is nice and calm on the ball, controls the tempo nicely.

“They’ve got a nice blend in that midfield. It’s a formidable prospect when they link up with the attack like on Sunday.”