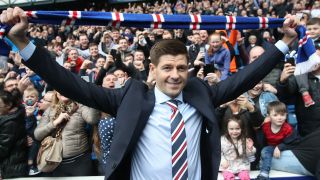 Tottenham’s never-ending search for a new manager has now seen them linked with a move for Steven Gerrard.

The former Liverpool midfielder is the current manager of Rangers and he has done well in his time at Ibrox.

He helped them win the Scottish Premier League title last season in an unbeaten campaign.

He has been tipped to become the next Liverpool manager when Jurgen Klopp leaves, however, he could make the move to England earlier, according to Give Me Sport.

They say Gerard hasn’t been a target for Spurs before now, but as they continue to struggle to name a new boss, the former England international is now believed to be on their radar.

The report says some figures at the Scottish club are worried that their coveted manager could be tempted into making a move to England this summer.

Spurs have reached a dead-end in pursuit of most of their managerial targets so far.

The Lilywhites have seen talks with the likes of Antonio Conte and Paulo Fonseca break down in recent weeks and it is still a serious guessing game for their fans in trying to figure out who would be their next manager.