Home » “This is a sackable offence” Pundit slammed after kneejerk comment 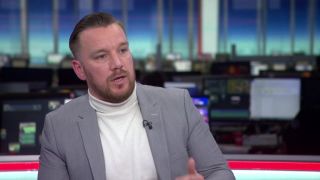 Tottenham Hotspur
“This is a sackable offence” Pundit slammed after kneejerk comment
By Bruce Grove - 19 March 2021, 15:00

It is safe to say that Jamie O’Hara is not what you would call a tier-one pundit but he certainly has his supporters on social media.

The former Tottenham player was speaking on Sky Sports and like most pundits went for the jugular after yet another bad performance from Jose Mourinho’s side.

The 34-year-old is certainly opinionated and judging by some of the responses to his comments, his strong views are widely shared.

Football Daily posted up a tweet with a video of O’Hara spouting his pearls of wisdom and some fans were not slow in agreeing with the former Billericay Town midfielder.

There were some that found it within themselves to attack O’Hara for his comments but that was always to be expected, the club’s fanbase is split right now between those that blame Mourinho and those that place the blame elsewhere.

Here are a few responses to what O’Hara had to say.

Agree with every word. Embarrassing

Couldn't have put it better…