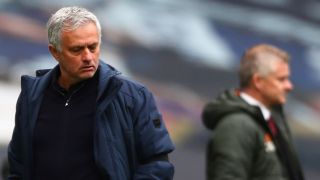 Tottenham suffered a major setback in their bid to make the top four this season after losing 3-1 to Manchester United today.

Spurs went into the game needing a win to help them push for a Champions League spot.

However, they ended the encounter further behind in the top four race and the Special One is now under even more pressure.

Tottenham had beaten United 6-1 in the reverse fixture and it was one of the results which helped Spurs to top the league table late last year.

Since the turn of the year, they have been on the decline and this game shows that there is more work to be done than we all thought.

However, Standard Sports’ Dan Kilpatrick watched the game and thinks that Mourinho is to blame for the loss.

He even reckons that the Special One’s power is fading, considering his substitutions.

With the game finely poised at 1-1, Mourinho chose to become conservative with his changes and it backfired with United scoring two more goals.

Kilpatrick thinks it shows the difference between both managers and wrote: “The two managers’ second-half substitutions spoke volumes about their differing mentalities and ultimately underlined why many believe Mourinho’s magic has faded for good.

“After Fred’s close-range equaliser made it 1-1, the game was finely poised, with United having the lion’s share of possession but Spurs continuing to look threatening on the counter-attack.

“Solskjaer’s decisiveness was rewarded when Greenwood crossed for Cavani to plant a diving header beyond Hugo Lloris at the far post and the teenager wrapped up the win with a fine third in stoppage-time.

“Mourinho, meanwhile, only called for Bale after United’s second goal. It was too little, too late.

“Once again, the Spurs manager was ruled by fear and failed to push his side forward and exploit a United team who looked there for the taking at times.”