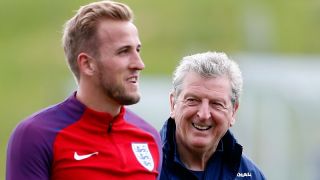 Tottenham Hotspur
“That’s what we don’t have” Roy Hodgson identifies the Tottenham player that Palace do not have
By Bruce Grove - 27 July 2020, 21:30

Tottenham has some of the best players in the Premier League and on their day, the Lilywhites can beat any team.

One player who is arguably the most important player at the club right now is Harry Kane.

The Englishman is one of the most lethal strikers in the world and the north Londoners are fortunate to have him on their side, while Crystal Palace manager, Roy Hodgson, wishes he had a player of his quality in his Palace side.

The Englishman showed his class yet again when he scored Tottenham’s goal in the club’s last Premier League game against Palace yesterday afternoon.

Spurs ended the season with a 1-1 draw against the Eagles, and it was Kane’s goal that opened the scoring.

The striker didn’t do much throughout the game, neither did he have much of the ball.

However, when he had a chance, he converted it in typical Kane manner and that impressed the former England boss.

“We need some players who can do what Harry Kane did for Tottenham today,” Hodgson admitted to BBC.

“That is touch the ball half a dozen times, produce five good passes and score a goal. That’s what we don’t have!”

Hodgson can take comfort in the fact that there are very few teams in world football that have a player that can do what Kane does and Palace are not the only club that wishes they had a player like him.

European giants promise Tottenham star something he hasn’t got under Mourinho
3 August 2020, 15:30

Source Close To Club: Discussions for Championship striker off to a shaky start
3 August 2020, 15:21
Follow Us