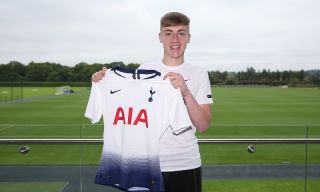 Tottenham Hotspur
“Still won’t forgive the fact we got him instead of Dybala” Mixed reactions as Spurs celebrate youngsters birthday
By Bruce Grove - 23 November 2021, 18:00

Forgotten Tottenham man, Jack Clarke is 21 today, and some Tottenham fans didn’t even know he was still at the club.

The former Leeds United winger joined Spurs in 2019 in a deal that delighted some fans, considering his performances for Marcelo Bielsa’s side.

However, his Tottenham career hasn’t taken off despite loan spells at Leeds, QPR and Stoke City.

His remarkable lack of playing chances at the senior level means he is making no progress in his career development.

He still has a contract at Tottenham until 2023 but it seems he may never make it to the senior team at the club.

The Lilywhites reminded the fans he was still their player today by celebrating his birthday on Twitter.

It is safe to say not every Tottenham fan approved of his transfer back then, especially because we were in talks to sign Paulo Dybala in the same summer.

However, some were more positive and want him back in the team. Here are a few of those reactions:

Still won't forgive the fact we got him instead of Dybala 🙄

Hopefully will come good some day 😊

what kind of player is he? trickster?runner?creator?