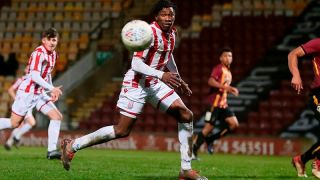 Tottenham appears to have made the first move in the battle to sign highly-rated Stoke prospect Mohamed Sankoh.

The 16-year-old has been banging the goals in for Stoke’s youth team since joining from Sparta Rotterdam in 2018, quite by coincidence after the Dutchman’s mother moved to the Staffordshire area.

Football Insider understands that Chelsea, Everton, and Celtic are all admirers of the teenage striker, and that we have even gone so far as to put a contract offer on the table for him to join this year.

The report adds that the proposal would see Sankoh initially join Spurs as a scholar before signing professional terms when he turns 17 in October. Because he is not on a professional contract at Stoke, there would not be a huge compensation fee for us to pay for any transfer.

Football Insider describes Sankoh as a strongly-built and athletic front player and I bet they’ve not guessed that at all.

If this is the case, I’m wondering who has picked out Sankoh. A parting gift from John McDermott? Do we have a new man in charge of recruitment to the academy or has Jose Mourinho identified him himself?

MORE: When Daniel Levy Asked To Pay An £8.9m Fee…Over 10 Years
MORE: No More Excuses: Has Jose Mourinho Still Got What It Takes?
MORE: Why The ‘Game’ Against Norwich Was So Unusual | Video