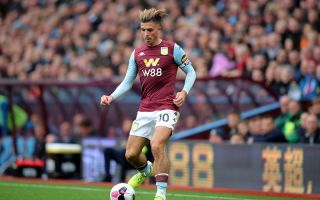 Jamie O’Hara has tipped Tottenham to make a move for Jack Grealish this summer as the Englishman continues to impress.

Tottenham have started their summer spending after they landed Pierre-Emile Hojbjerg from Southampton recently.

The Dane’s arrival signalled Tottenham’s intention to strengthen their team this summer after they managed to end the campaign in the Europa League qualifying round position.

Jose Mourinho was brought in to win trophies because the club has made tremendous progress over the years, but they have failed to land any silverware.

Now that they have a proven winner as their manager, fans will be expectant that next season will bring some silverware.

One player that has been linked with a move to Spurs this summer is Grealish and O’Hara believes that he might join Spurs, even adding that the Lilywhites might have to sell some of their stars to seal the transfer.

He told TalkSport: “He’s had a great season, he would be brilliant for Spurs.

“We should have got him a season ago when he was a lot cheaper. I don’t know if Spurs have got the money, maybe if they offload a couple. He would be great.”

That being said, O’Hara added that his asking price was perhaps too much: “He’s not worth £80m; I love him, but in the current market, absolutely no chance.”

So, O’Hara admits there is no chance, which there is not but at the same time opines if Spurs offload a couple of players then it would be great.

There is zero chance Grealish will be a Spurs player next season, absolutely zero and O’Hara probably knows this and if he does not, he should.

Pundits are getting lazier and lazier and pushing this sort of nonsense reflects badly on them.

Of course, we will report their opinions about Spurs but it in no way means we agree with them, not when they are being ridiculous.