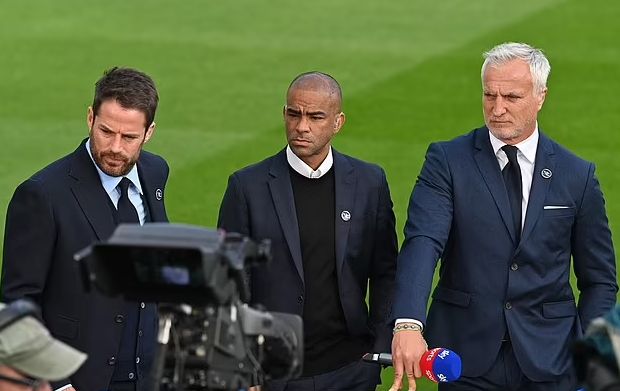 It has long seemed that Sky Sports and their bunch of questionable pundits have an agenda against Tottenham and yesterday went a long way to vindicating that impression.

David Ginola, Kieron Dyer and Jamie Redknapp were the pundits on duty yesterday for the Newcastle v Tottenham clash and despite Nuno Espirito Santo’s men coming away with all three points and a fairly decent performance, they still found it necessary to slam the team and to just make stuff up.

For example, Dyer claims that Spurs have £300m to spend, Redknapp reckons that Man City offered £130m for Harry Kane and generally, all three disparaged Spurs and their transfer market activities.

On one hand, they were ripping into Daniel Levy and Spurs for selling all their best players down the years and on the other hand tearing into Levy for not selling Kane.

It is well known that Redknapp is still sore that his father was sacked by Levy and Dyer just does not look like he is all there, though Ginola’s comments were a little disappointing.

Sky Sports took it upon themselves to post up a tweet of the trio’s comments and apart from other clubs fans taking an opportunity to jump on the bandwagon, the pundits were absolutely slammed by the fans.

Here are just some of the reactions to the ridiculous punditry in action yesterday.

#Spurs really ruined @SkySports big day today. The post match agenda is absolutely galling. One swallow doesn't make a summer but #THFC were convincing winners today against a poor outfit. Jamie should get over that #Levy roaded his Dad. Its 10 years now pal.

How after a win and Dominant performance has it spun to the negative? Or is it the @SkySportsPL way, think it is! I can as a spurs fan but this lot aren’t

So let me get this straight. They're criticising Spurs for historically selling their best assets and at the same time criticising them for not selling Kane this summer.

Jamie talking about a 130 million offer that never was ??

Really poor from Jamie Redknapp making up absolute nonsense about Man City bidding £130m for Kane. They didn’t: ask Man City. Really poor of @DavidJonesSky and @teamginola for not pulling him up for it.