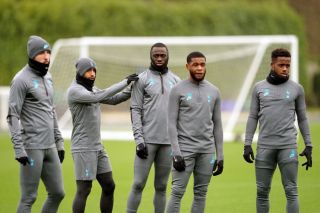 Jose Mourinho has worked in the same way for 15 years and been a success everywhere he has been, although less so of late. There was a worry that Spurs were getting an old-fashioned manager with old-fashioned tactics.

To his credit though the Portuguese has brought with him new ideas, most notably his defend with a back four, attack with a back three concept, designed in part to accentuate the strengths and hide the weaknesses of full-backs Serge Aurier and Ben Davies.

Except, the strengths of Aurier and Davies…aren’t that strong; certainly not strong enough to make them the basis of your entire setup, and it hasn’t stopped Aurier from making regular defensive boo-boos as it should have.

We can’t afford to address every problem we have in the transfer market so Mourinho is going to have to find solutions from within the squad. Luckily he already has the personnel who seem to be a perfect for this system.

Ryan Sessegnon is a full-back with five times the attacking ceiling of Aurier; a good crosser and a genuine goalscoring threat from outside the frontline.

MORE: Spurs Staff Still High On Sessegnon, And So They Should Be

He might not be quite as strong a one-on-one defender, but I’d bet he’d still cost us fewer goals than the Ivorian because he won’t make daft decisions.

Japhet Tanganga is a defender with the mobility of a full-back and is very capabale of playing on the flank. His skill-set is ideal for a third centre-half.

He’s had such a promising breakthrough season and Jose needs to find him a regular spot in the team going forward . I’m worried he could get lost.

Tanganga on the right, Sess on the left. Switch the flanks; solve the problem.

It’s so obvious; I’m not sure why Jose hasn’t done it already.