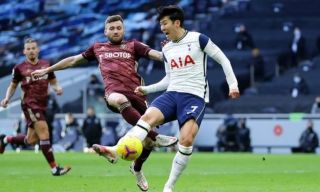 Lord Sugar couldn’t hide his delight at the performance of Son Heung-min yesterday after the South Korean scored Tottenham’s second goal in their 2-0 win over Brentford in the Carabao Cup semifinal.

Spurs had taken the lead through a Moussa Sissoko header, Brentford then had an equaliser rule out for offside.

The Bees kept looking for a goal that would draw them level in the game, and Tottenham needed to kill the game off.

Tanguy Ndombele then set up Son for the killer goal on the 70th minute of the match.

Spurs are now just one game away from ending their wait for a trophy and Lord Sugar thinks that it is thanks to Son.

He took to Twitter after the South Korean had scored to praise him for his goal, claiming that he was Tottenham’s best player on the night.

Son has been one of the most important players at Tottenham this season, and that goal was his 16th in all competition for them so far.

The club will hope that he will fire them to the Carabao Cup and perhaps other trophies this season.