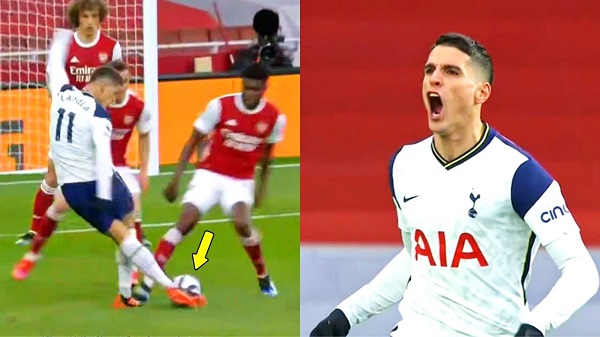 Tottenham Hotspur
“Lamela is the only one that deserves to sleep on a bed tonight” These Spurs fans are not a happy bunch
By Bruce Grove - 15 March 2021, 12:00

Arsenal beat Tottenham 2-1 at the Emirates in the latest NLD and some of their fans weren’t happy.

The Lilywhites were in fine form prior to the match after seeing the likes of Gareth Bale, Son Heung-min and Harry Kane hit top gear recently.

Spurs scored the opener through an excellently executed rabona from Erik Lamela who would later be sent off.

Arsenal had the better passage of play in a game that they basically dominated and they responded with two goals of their own to turn the score on its head.

Several Tottenham players failed to prove their worth in the match and that didn’t impress quite a few of the fans.

The club posted an update on the result after the final whistle on Twitter and some fans made their feelings known.

They praised Lamela for his performance even though he was sent off, while some stars and Jose Mourinho were slammed by the fans. Here are a few of the reactions:

Leave Doherty at the Emirates

Mourinho got it massively wrong today

This is worse than the 4-2 result

Terrible terrible managerial performance from Jose. Don't get me started on the play. Lamela is the only one who's done something worthy. Doherty is a championship player at best. Got to feel for Kane, world class and playing alongside this lot.

This team should be disbanded and everybody should go home pic.twitter.com/Yb5iO86Kzb