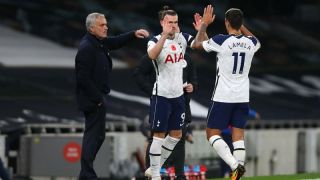 Tottenham has hit a rough patch in their fine start to the season as they were beaten 2-0 by Leicester City at the weekend.

That loss was their second consecutive Premier League loss, and they are now winless in three league games.

Spurs have relied on Harry Kane and Son Heung-min for much of their goals this season.

With Jose Mourinho only trusting certain players to do the job, he has hardly rested the likes of Pierre-Emile Hojbjerg and Moussa Sissoko.

However, every team that has won things have had good players who can come off the bench to make things happen.

Spurs do have the likes of Harry Winks and Gareth Bale to call on, but they haven’t done enough when they have been brought in.

Bale was in uninspiring form again against the Foxes, and Sports Mail’s Adam Shergold says that the likes of Bale have to help Kane and Son.

He writes: “As Liverpool pull clear, Tottenham, who a week ago looked the most likely to challenge them, have picked up just one point from nine.

“While Harry Kane and Son Heung-min have formed the most devastating partnership in the Premier League this season, there is a danger that Spurs become too reliant on them.

“In Sunday’s 2-0 defeat to Leicester, that telepathic link between the pair seemed to have broken down but the back-up options off the bench couldn’t improve things.

“Jose Mourinho brought Gareth Bale on at half-time and Lucas Moura early in the second half but neither were able to turn the game around.