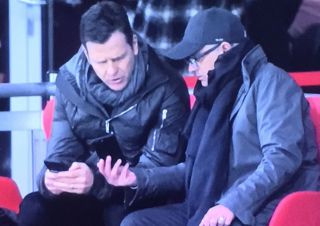 The Frozen One will be shopping for hats this week if he has any sense, as the UK finds itself in the grip of Storm Ciara.

Apparently José was so relaxed at his barbers, he fell asleep.

In the full interview, which you can watch over on Sky Sports, Mourinho makes it crystal clear for Paul Merson that his analysis of José’s mood was way off beam.

“Contrary to some people who want to be in the news and tell things that are not true – I am really happy at the club. You know me quite well, enough to know that I am really happy. Difficult? yes, but if it was not difficult it wouldn’t be for me.”

Merson was of course, just making mischief, but its good that Mourinho was confident enough to come straight out and put the smear to bed.

The Spurs’ gaffer was in Germany (despite the storm) to scout our Champions League opposition RB Leipzig.