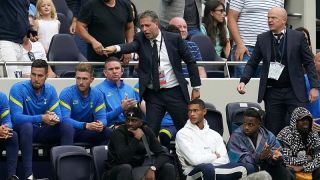 Alan Hutton agrees that Fabio Paratici and Steve Hitchen are sitting too close to the Tottenham players during home matches, amidst reports that the players don’t like their actions on match days.

Paratici was made the Tottenham football director this summer after his successful stint at Juventus.

The football executive is one of the best in Europe at what he does and he has helped Tottenham to make some impressive signings in this summer’s transfer window.

However, the latest sitting arrangement at the Tottenham stadium for home matches puts him and Hitchen very close to the players.

The Sun reported earlier that Tottenham players don’t enjoy their sitting positions as well as their behaviour during matches.

This is reportedly causing growing unrest in the camp and Hutton says he has never seen such an arrangement before.

He also added that if he was a Tottenham player, he would definitely feel some type of way regarding that.

“That’s a strange one – I’ve never seen that before,” he told Football Insider.

“You don’t see Daniel Levy down there sitting next to the manager.

“I don’t think the director of football has to be anywhere near that.

“He’s done his job with the recruitment; he doesn’t have to be down there.

“If I was sitting there and the director of football was sat next to me – that would feel a little bit strange.

“I’d like to think that as we return to some sort of normality, that would change.”

“I can see why the players think it’s a bit ‘different’ – should we say?”