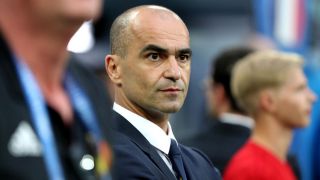 Tottenham Hotspur
“I think he’s a brilliant coach, world class” Manager linked with Spurs heralded as “a superlative coach”
By Bruce Grove - 13 May 2021, 15:00

Roberto Martinez has been linked with the vacant managerial role at Tottenham this season.

The former Wigan and Everton boss has been managing the Belgian national team and has made them one of the strongest teams in the world.

He will lead them into the Euros in a few weeks hoping to win the tournament.

That might be his last competition as their manager regardless of the outcome as he reportedly targets a return to club football.

Spurs might offer him a return to club management and Football Insider says he is interested in the role.

Former Scotland boss, Alex McLeish, appears delighted by the news that Martinez could become the next boss of the Lilywhites and he says the Spaniard’s time as the boss of the Belgian national team has shown that he is a brilliant manager.

He then backed him to go to any team in Europe and make an impact, including the Premier League.

“To go and coach a Belgium team at that level is incredible coaching and mentality. I believe that he could go anywhere in terms of the top divisions in Europe. He could certainly come back to England and take a top club.

“He’s obviously done a good job in the past for smaller clubs like Wigan, keeping them in the Premier League. It didn’t go forever but again, it’s down to the quality of the personnel that you have on the field.