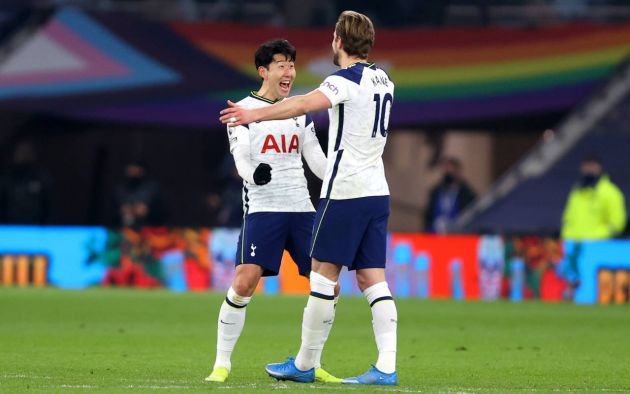 Tottenham Hotspur
“I love them both so much” The love comes out for Tottenham’s “record breakers”
By Bruce Grove - 8 March 2021, 13:00

Harry Kane and Son Heung-min broke the Premier League record yesterday in the 4-1 win over Crystal Palace yesterday when they combined for the 14th time to score yet another goal.

The previous record was 13 set by Alan Shearer and Chris Sutton which had stood at 13 since 1995/96 and there are still 11 games to go in the season.

It is a remarkable achievement, especially when you consider some of the partnerships that have been witnessed in the Premier League down the years.

Tottenham took to their official Twitter account after the game to recognise the pair with two simple words “RECORD BREAKERS” and it brought out all sorts of responses.

Of course, there were the jealous and bitter tweets, they cannot help themselves and are easy to ignore but there were so many more positive ones and here are just a few to savour.

🥺🥺 I love them both so much

So many bitter fans out there lol. Yes it doesn't come with a trophy 🏆 but when these two nearly score more than the Arsenal starting 11 that puts a smile on my face. Need to keep improving and growing. Signings in the summer especially at the back.

Congratulations @HKane and @hm_sin7 and @GarethBale11 I love u guys so much….thanks for making my night… @SpursOfficial for life…full time Nigerian supporter🙌💞💞

Superb!
There aren't words for how great these two are 👏👏👏
And special mention for Lamela for the great ball to Son 😁

Such a feat under a finished manager with outdated tactics.

Best combo in the league

Kane and Son have been brilliant this season, they will likely go on and add to the record and it is one that could stand for a very long time.