Home » Exclusive Footage: Is Robbie from Arsenal Fan TV a bit of a con man on the quiet? 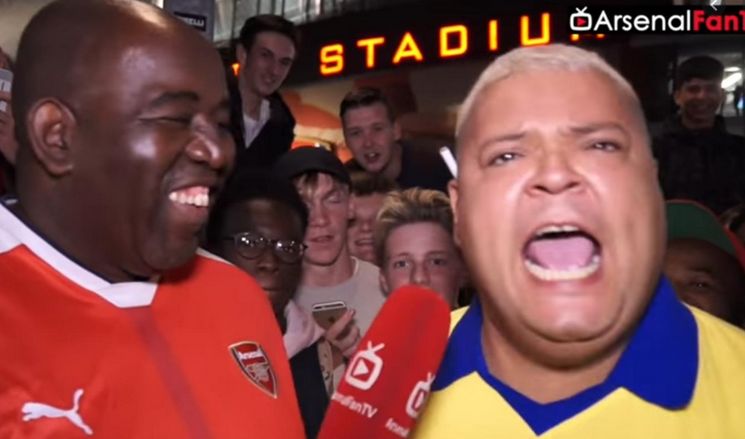 Latest Blog On The Edge With Andrew Gold
Exclusive Footage: Is Robbie from Arsenal Fan TV a bit of a con man on the quiet?
By Harry Hotspur - 9 July 2020, 15:28

Andrew Gold is back with a new series of podcasts entitled, ‘Andrew Gold On The Edge’, and one of his latest works is one of those remote interview type deals with that well know ambassador of popular Woolwich opinion, Robbie Lyle from Arsenal Fan TV.

The question probed in this clip was Does AFTV (Arsenal Fan TV) do better when the team loses? Which struck a chord with me, as I invented the Footballing Autopsy.

What was curious here was that Robbie (who I had hitherto felt was a sometimes poorly treated character) actually felt really comfortable fibbing on camera. When discussing his brand, which he has every right to crow about, it’s all product, content, numbers, solid numbers, performances, product, blah….

But then when Arsenal lose, AFTV is somehow therapeutic. It’s not about the clicks.

Andrew touches upon his own self awareness when dealing with extremely negative outcomes, because as we all know, watching puppies play gaily in sunshine is fine, but filming the owners of a very poorly puppy, sat in a vets’ waiting room for a verdict – like it or not – is box office.

I know when Spurs lose that I can provide a commercially successful funeral home and wake (catering rate-cards available upon request) and Robbie knows that too, but he won’t admit it on tape because that means he changes his plea from not guilty, to very guilty indeed.

So what was he supposed to say? It doesn’t matter, because what we heard was, “I’m a big harmless teddy bear, so no punches to the face, and do you need my PayPal?”

This blog has always had a commercial remit, and we’re very proud of that, and every time some swivel-eyed crypto-Marxist took a swing at me it was completely reaffirming. If you’re good at something, never do it for free…

It’s easy to mock those that put their heads above the parapet, it’s never bothered me because I’m a deeply unpleasant individual when the mood strikes and immune to such whining- but I am entirely true to myself.

I once asked a relative if they read me, and was greeted with gale of laughter and the following, “I did once, it was like being stuck in a bar with you – while you held court – never again!”