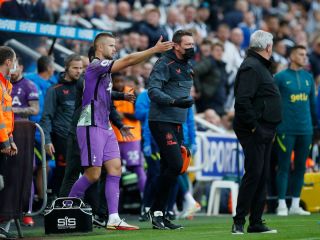 Tottenham Hotspur
“Eric Dier is an absolute legend” Despite poor defending and an own goal Dier highly praised
By Bruce Grove - 18 October 2021, 9:00

Eric Dier is one of the players that a lot of Spurs fans wish would never put on a Tottenham shirt again but there is no doubt that the man was a hero yesterday, alongside Sergio Reguilon.

Dier and Reguilon were named joint man of the match but it was not for footballing reasons, certainly not in the case of the Englishman, who was rather poor with his defensive efforts that culminated with an own goal.

The Tottenham duo was instrumental in seeking out medical attention for a fan that had collapsed in the stands.

Reguilon was the first to notice that there was something going on with the fans frantically calling for help for the stricken person, the Spaniard then approached the referee Andre Marriner to inform him that something was amiss.

Dier did not wait on the referee to take action and instead sprinted over to the sidelines to urge the Newcastle medical team to go to the aid of the fan, which they duly did.

Their actions may have saved the fans life as Newcastle has confirmed that he is now stable in hospital.

Fans, pundits and journalists were all full of praise for the Tottenham pair with one calling Dier a legend.

"It is entirely possible that they have saved someone's life today."

Sergio Reguilón and Eric Dier have been named joint Premier League Men of the Match for #NEWTOT after their swift-actions during an incident during the first-half. pic.twitter.com/OfFrGJjVOU

Whatever your thoughts on him as a player, Eric Dier is an absolute legend. Clearly a very good bloke.

Widespread applause as stricken fan carried out on a stretcher. Hope and pray he's OK. Players coming out to resume the remaining seven minutes of the first half. Huge respect to Reguilon for quickly alerting ref to the incident and Dier for calling for the defibrillator. #NEWTOT

Well done to Sergio Reguilón for stopping the referee to make him aware of a fan that has taken ill. Also to Eric Dier for pretty much forcing the medical staff to get over to them with the defibrillator.👏👏👏 pic.twitter.com/Wu0JjUhM1c

Reguillon and Dier deserve plenty of praise for quick response. Every second counts in this scenario.

This is not the time to call out Dier for his footballing performance but instead to applaud him as a decent good man, the same applies to Reguilon and both of them did Tottenham proud yesterday.

Also, the ref should not be forgotten in all this, he handled the situation like a pro and if there is one thing English refs are good at, it is remaining calm in a crisis.