Home » “Dont worry Dele, we all count it as yours” Spurs fans tell Alli to forget own goal verdict 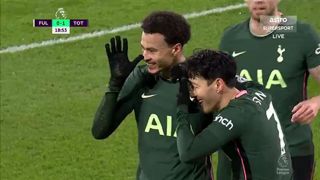 Tottenham Hotspur
“Dont worry Dele, we all count it as yours” Spurs fans tell Alli to forget own goal verdict
By Bruce Grove - 5 March 2021, 12:32

Dele Alli showed why he has to be kept yet again when he opened the scoring for Tottenham in their narrow win over Fulham.

The goal was eventually awarded as an own goal, but it will not take the shine off a resurgent performance from Alli.

It delighted the attacker to have repaid Jose Mourinho’s faith with the goal, however, his joy was quickly cut short.

BT Sport posted the goal on their Twitter page, but Alli responded with a sad face emoji with the caption: “Own goal?”

Spurs fans were quick to assure him in the comments that they will always consider the goal to be his, no matter the verdict. Here are some of the comments:

Dont worry Dele, we all count it as yours pic.twitter.com/b30YM6AInT

Your goal in my eyes Dele 👍🏻

Stats & history books may say that, but we all know it was your goal 💪

Even though the goal was taken from him, his performance in the game means that he is returning to form at the right time.

If he continues and Gareth Bale also keeps contributing, Tottenham can be confident that they can achieve a top-four spot at the end of this season.