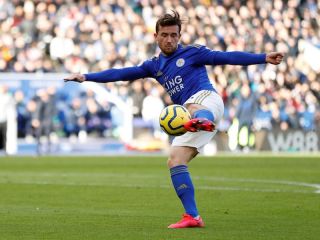 Somehow little known Spanish publication Todo Fichajes seem to be the ones in the know about the future of Leicester City defender Ben Chilwell.

They reported last week that Chelsea had started negotiations to sign the left-back, whose Foxes form has made him first choice for England.

Now Todo Fichajes understand that Spurs have made our own enquiries over Chilwell, who Jose Mourinho wants to improve his defence for next season. The report adds that we’d be willing to pay out £40m for him.

Chilwell would be a big upgrade on Ben Davies who is the incumbent at left-back now that Danny Rose has one foot out of the door, so I can see why he’d be a desireable target. I’m just not sure if he is an affordable one?

MORE: Danny Rose Should Stick To Handing Out Pizza | Opinion

According to ESPN, losses caused by the Covid-19 pandemic and our huge stadium debt will leave Mourinho with a starting transfer budget of only £25m this summer, a total which could be supplemented by player sales.

Even anticipating a diluted market, it isn’t unrealistic to think that we could generate the remaining £15m from selling Rose, Juan Foyth, Kyle Walker-Peters and Erik Lamela. Transfermarkt.com’s combined value of the quartet is £48m, so in a best case scenario, we may end with £60m-£75m to spend.

But even if the numbers could add up, using around 2/3 of that overall budget to splash out on Chilwell seems improbable. If we are to stretch to make one major buy, it is likely to be a centre-half or holding midfielder. Between Davies, Ryan Sessegnon and Japhet Tanganga, we can cope at LB.

Add to this the competition for Chilwell’s signature, Leicester’s certain want to keep him and the fact that they will presumably have Champions League to help them do that, and our chances of signing him are close to zero.